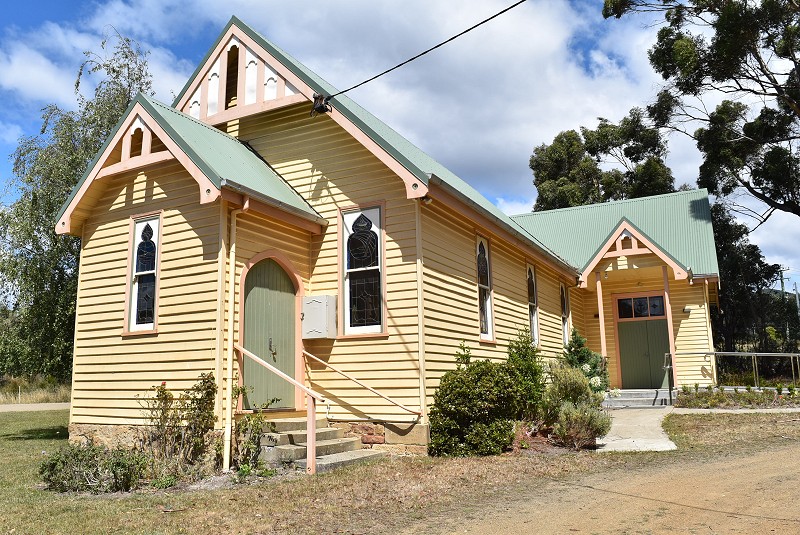 All are welcome to share in this celebration, especially those who have had a connection with the Woodbridge church. We look to our future knowing that it is God’s Church and we are His people called to serve Him in the Channel area and beyond.

Like many of our communities the Woodbridge Uniting Church as a long history of being connected to the local community. Below is a brief history of how this building and the people of this community have grown and changed over the years.

On ‘Black Friday’ 31 December 1897 a devastating bush fire destroyed the Union Chapel which served this rural community. Mr George Miles promptly donated land for the Wesleyan Methodists to build a new church. Home Missionary Mr A.R. Pratt led the people and despite the loss of orchards, farms and buildings, donations rolled in. On the 11th April 1898 foundation stones (yes there are two of them) were laid by Aldermen G Hiddlestone Esq. Mayor of Hobart and W Smith Esq. of Hobart.

At the first service in the new building on 17th July 1898, Mr Pratt preached from the words, “Except the Lord build the house, they labour in vain that build it.”

From 1898 to 2009 the church was served by forty-three ministers or home missionaries under a variety of different oversights.

At union in 1977 the Kingborough Circuit became known as the Uniting Church Kingborough Parish. In 1998 we were part of the Linked Congregations of Kingston, Taroona and Channel. From 2009 we became a stand-alone congregation within the Presbytery of Tasmania.

Records show that a meeting of the Hobart District Synod in November 1924 a resolution was passed congratulating the Woodbridge circuit on its enterprise in the erection of a parsonage, and a schoolroom.

Sadly the parsonage was lost in the 1967 Bush Fires and never rebuilt. However the church buildings, although threatened by the flames, were saved, and the schoolroom/hall’s Baltic pine walls still resound with children’s’ voices during a reach out program to the local school.