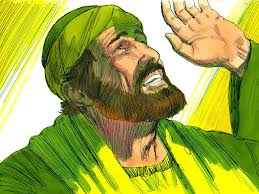 The conversion of Saul / Paul

This passage has given birth to a phrase which has made its way into our broader culture and our language, one out of many with its origins in the Scriptures.  In our culture, the media often speaks of a public figure having a “Damascus Road experience” when they experience a radical change of mind on some pressing issue.

For Saul of Tarsus, initially a violent opponent of the early Christian movement, this was his “Damascus Road experience”, both literally and in the way we use the phrase today.   Saul was travelling to Damascus with papers authorising him to arrest anyone within the Jewish community who were followers of the Christian movement.  Suddenly, while travelling on the road, he encountered the risen Christ, and his entire purpose in life was re-oriented.

However, for Saul’s reorientation to be effective, he needed some mature, calm, and patient nurture and support.  A man named Ananias was called to provide that support.  Despite his natural misgivings (Saul’s reputation had preceded his arrival in Damascus.), Ananias was able to provide that crucial nurture for Saul.