A Church Sledging in Stowport 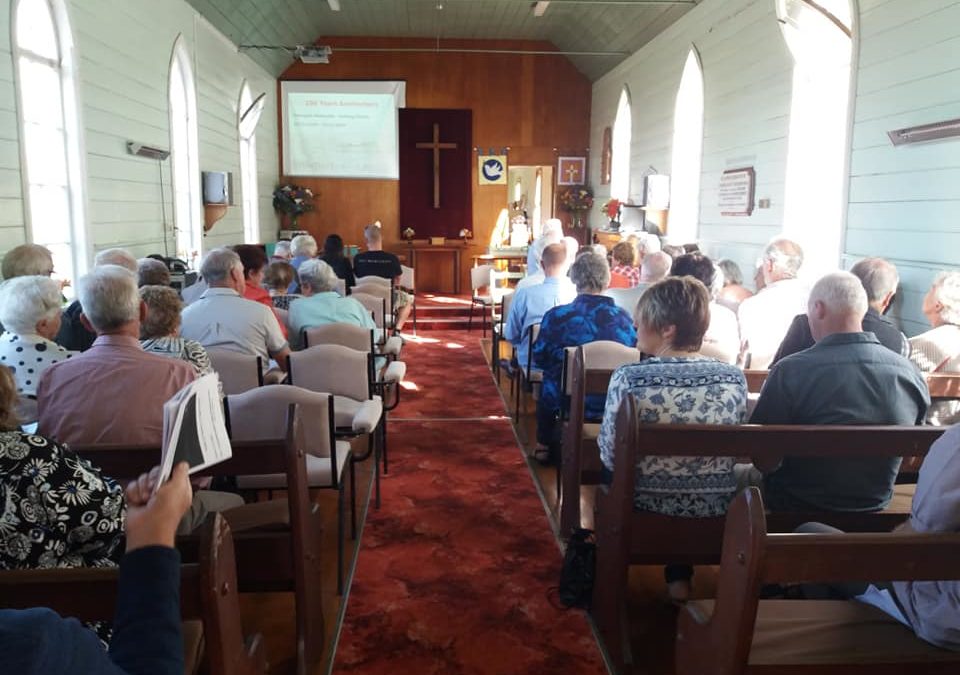 A BRIEF HISTORY OF THE STOWPORT CHURCH
The Stowport Church was first built in 1891 on a different location by early pioneer Christians, including Robert Rutherford Snr. who has been termed “the Old Man of Stowport” for his pioneering escapades. His Bible is today held in esteem at the Burnie Museum and dates back to 1856. There are photos of the Bible and articles for each family discussed on display.

In 1919, 100 years ago, the church was moved to this site by sledge and bullocks, an enormous task for people of the early era. The cost of removal and re-erection was £150 and the opportunity was given for the community to place a donation on the foundation stone. The amount received was £40.  The men with the vision for this church were William Rutherford, Robert Scott Rutherford, Samuel Thomas Marsden, Thomas Vertigan Atkinson and Leonard Ling.

William Rutherford is recorded as an ardent follower of the Methodist Church all his life and gave the land for this church and the tennis court with a covenant on the tennis court that no tennis was to be played on Sunday. He was also a trustee of the hall.

Robert Scott Rutherford is said to have been a man of sterling qualities and for over 50 years been a loyal and enthusiastic worker in the church. He was a faithful Christian gentleman with a simple faith and the Emu Bay Times says, “His life was gentle and the elements so mixed in him that nature might stand up and say to all the world, ‘This was a MAN’.” His memorial says, “His influence lives” – members of his family still attend this church today.

Thomas Vertigan Atkinson was a keen follower of Christ and a top sportsman who enjoyed playing cricket (typical Atkinson). He also enjoyed agricultural shows and was a strong church attender.

Margaret Chalk (nee Atkinson), ninety years old and still following Christ today, states in a letter that she was confirmed in the church and remembers walking to Sunday School with Mr Ling, the Sunday School Superintendent, as Sunday School was at 2.00pm, an hour before the service. She recalls, “Mr and Mrs Ling were dear people and I would go in and wait for Mr. Ling to be ready. When we got to the door Mrs Ling would always say, ‘Have you got your hanky, have you got your collection, have you got your peppermint?’ I noticed he had very shiny black boots and a moustache that was well waxed and turned up at the corners. This really intrigued me. As stated on his memorial, ‘They serve Him day and night’ is a fitting remembrance because community activities happened here. It was the life of the community with anniversaries and prize giving; fairs and carnivals including chopping, running races on the oval followed by a harvest festival; and in the evenings Burnie people would provide a concert with supper following. Picnics were at South Burnie Beach with activities so designed that every child won a prize and lollies.

George and Emma Elphinstone were staunch Methodists. George did the collection while Emma played the organ and took Holy Communion. Emma also ran the end of the year church concerts, including sewing costumes. She taught the children to dance and sing. What a strong foundation to build upon.

Samuel Thomas Marsden was a well-respected pioneer of Tasmania. He was a very hard worker, clearing land for pastoralists and putting all his earnings into the land. He was a man of strength and grit who toiled hard and experienced hardship, but with a resolute heart and a smiling face he battled the wilderness. He bought a property from WH Atkinson in Glance Creek Road and turned it into a vegetable Garden of Eden. For fifty years he was connected to the church and was held in such esteem that in 1919 he laid the foundation stone. “Millions have gone to their rest but none ever hammered out in human soul a more honourable life than ST Marsden.”

Leonard Ling was very active in the church and also the local representative on the Burnie City Council. He was active in the Christian Endeavour Movement establishing the Wesley Guild at Stowport that had an attendance of fifty young people. He was a trustee for 23yrs.

In this church children were important as frequently the children out numbered the adult congregation, which saw some outstanding efforts from ministry to engage children in the first part of the service.

Sunday School was fun and anniversary was enjoyable with children, singing and prize giving. We supported the Bible Society and were frequent riders in the Bike for Bibles. Pancake Days and milestone birthdays were yum. We had confirmations, and even liturgical dancers, performed in Lyn Templar’s production “Fill Up Your Life” and loved Kid’s Camp Out. Yes we were a family.

The Time Capsule buried 22years ago and retrieved today carries the most beautiful message I wish to conclude with, “Being part of a family is like having a long chain of LOVE that goes from one generation to the next.”  God bless all the generations & surround us today with His Love for each other.

WHAT STOWPORT DOES NOW
The congregation gathers for worship twice a month in this church – currently numbering 5 – uses this building as a launching pad into our community.

Since the shop and post office over the road closed some 11 years ago, we have been hosting a weekly morning tea where those in the community are welcome to a time of sharing and caring, eating and talking – and laughter – something we seem to do at Stowport without much effort!

This gathering subsequently spawned a craft group that meets weekly and together with them, supported by the Natone School Parent and Friends, we host a BIG Morning Tea mid-year that over 100 folk attend, a community Christmas luncheon in early December whereby we honour those in our community over the age of 80 with a complimentary meal, and, of course, our community Christmas Carol service on Christmas Eve.

We financially support those causes close to our heart – last year it was MNS Research, Buy a Bale, Drought Angels, and Frontier Services.

In stepping outside our church, we have discovered our diversity as a gift and opportunity that it is. To paraphrase Bradon French, our Synod’s Intergenerational Youth Ministry Co-ordinator, perhaps it’s not lost people who need to return to the church, but a lost church that needs to return to the people in its community.

We recognise that we humans are social creatures – with an innate need to connect and belong. With God’s Grace, Stowport’s future lies in being a space for that to happen, a place of love and acceptance, where we help one another uncover the best versions of ourselves.