A Grape or Two at Gala Kirk 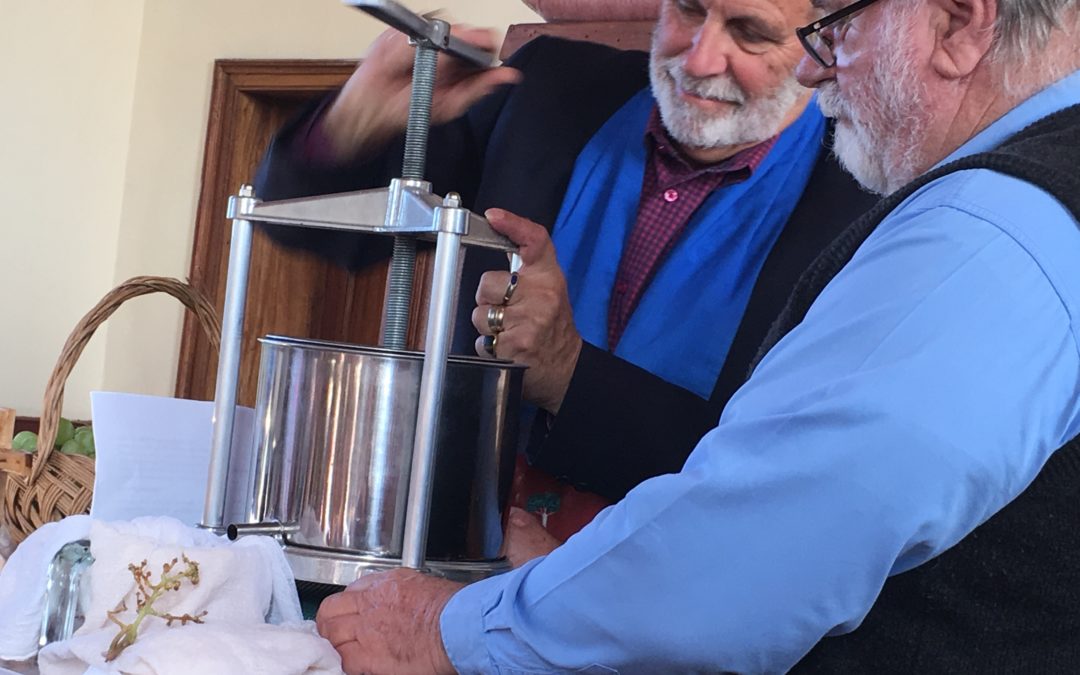 The Uniting Church Faith Community at Gala Kirk Cranbrook on the beautiful East Coast of Tasmania, celebrated the end of the grape harvest with a harvest festival service held on Sunday the 29th April at 2pm [a very civilized time]

Cranbrook is a small but charming town which harbours the old Gala Kirk church. It remains almost as it was built: no electricity, no plumbing, pews big enough to seat entire families on each individual pew, a pedal organ which despite it age plays beautifully hymns from the TIS and a view that would challenge most country churches and all city churches.

The 29th of April saw the church contain some 32 people, some locals and some drifters in, an alter laden with grapes, red and white, locally grown potatoes, pumpkin by the arm full, preserves of apricots and tomatoes in Fowler Ware, a loaf of bread and  locally produced wine.

With a press provided by Stuart Macpherson we pressed the grapes which provided our communion grape juice, a loaf of Damper baked by Patrol Minister Dennis Cousens and as we sang “Bringing in the Sheaves” some of our young people brought in some freshly cut sheaves and place them with the harvest gifts.

Our prayers of thanksgiving were around the gifts given in abundance, grapes, a sprig of Lavender, a clutch of Spinning Gum branches and an empty cross, all signifying the gifts of God.

Stuart preached on the lectionary gospel for the day the “True Vine”, be prepared to be used for the Glory of God.

As we left, a cut up pumpkin was given out to everyone to use and to grow the seeds for the future.

We had a great celebration, we had some fun and we had a wonderful afternoon tea at the conclusion of the service in the tiny Cranbrook school house. Thank you to Jennie Amos and Pat Greenhill for your dedication to the faith community of Gala Kirk.