From Myanmar to Ulverstone and the Uniting Church 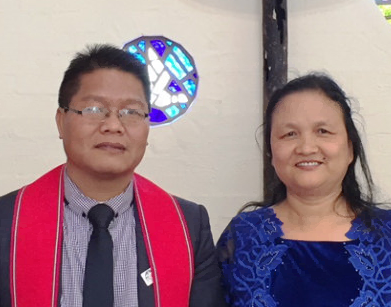 REFLECTIONS Gospel Ralte
Early years:
My father was sent to be a missionary to North Western Part of Burma 23rd February 1925 by North East India General Mission (NEIGM). He was just 21 years old then. He learned native dialects and wrote and translated songs and hymns and the Scriptures. He was the first missionary who translated the gospel of St Mark into Anal Naga Language. He was later received by British Methodist Mission, got ministerial training and ordained in 1948. His first wife died, and got married again. I, as a second child, was born to Rev. Dengkunga Ralte in his early 60s and Mrs. Khuangkhumi Ralte in Rih Khawdar village, near Rih Lake on the 20th of December, 1965. My father died when I was just 11 years old on 7th May 1977. My Mum raised us up in the midst of hardship. I used to help my family by working as a labourer (kuli) from my childhood. I still remember that day. I followed Adults and young people carrying goods (clothings/longyi) from Moreh (India) to Tamu (Burma) swimming across the river.

The Call:
A visible call to serve the Lord began with a bloodcurdling incident occurred to me when I was just about 3 years old. I was standing near my father when he tested the laying log with a Japanese sword whether it was dried enough for firewood. Unexpectedly the sword he raised slipped from the surface of the log flying toward where I stood and by God’s grace the hand with a sharp sword stopped right at my forehead, leaving just a space of a single hair to my head. Shivering in fear, my Mum recalled, they carefully checked my forehead, but nothing happened. Dad said that it was only by the direct intervention of God that I narrowly escaped from head- chopping. Realizing that God wanted me to serve Him, right there at the spot, my parents knelt down and dedicated me for the service of God.

I received God’s special call again through a series of Bible Studies held during the Holy Week of 1978, after accepting Jesus Christ as my personal Lord and Saviour, I dedicated my life to God on Easter Sunday. Since then I had a great passion to study the Bible and serve God. Mum said that as a small boy whenever people asked me what I would like to become when I grew old, I used to answer, “Pastor.”

Early ministry and theological education:After my confirmation, I straightway involved in ministry of Children Sunday School, Youth Departments and Ethnic Community Social Movement. I took part in gospel outreach programs and other evangelistic Preaching tours
While working as a District Clerk in Tamu District Office of the Methodist Church, my Mum prayed for me and I left my home town in persuade of theological education. I took any available jobs given by the College. By God’s gracious provision I successfully completed two degree courses, B.Th., and M.Min, from Presbyterian Theological Seminary and Asia Evangelical College and Seminary in India. I attended a Discipleship Training School (DTS) of Youth with a Mission. Went back home to Burma and got married with Grace Dengthangi Ralte (Mya Yee) in 1995, and now we are blessed with two children, Gloria Lalrawngbawli Ralte and Ebenezer Vanlalzirsangliana Ralte.

Evangelist, Theological Educator and Pastor:
Soon after getting home, I worked as itinerant evangelist, Bible teacher, and we run a discipleship training for local young people. Since 1997, Grace, B.Th., B.D., M.Div, and I started teaching career at Myanmar Theological College in Mandalay. I was sent to do M.Th. (Systematic Theology) at Trinity Theological College in Singapore in 2000 and graduated in 2003. Later as selected, in 2005 I did a research on Asian culture and theology in Chung Chi College of the Chinese University, Hong Kong. As there was a call for pastoral ministry, I applied and got special ministerial training, and from 2016 I served for 3 years as a probational minister and ordained in March 2009. Since i joint pastoral ministry, Grace and our children had lived in theological campus and we used to meet together in summer holidays. I taught courses on theologies, world religions, Homiletics, worship and preaching and English subjects.

Refugee Minister and Minister in refuge:
For almost two year I served the Lord as a refugee minister among Burmese (chin ethnic) refugees and migrant workers in Malaysia. Working hand in hand with UNHCR, my pastoral roles in Malaysia consisted of connecting them with local churches and communities, helping them for resettlement, arranging their temporary education, and caring for their spiritual, mental and physical well beings.

In 2012, I went back to Burma. As Circuit Superintendent, I looked after six local congregations of different dialects. The persecution and discrimination based on our faith and race I have been experiencing since my childhood was still smoothly running upfront on the soil of military-backed Buddhist majority country. Using slogan of “one religion, one race, one nation,” the then Burmese military government introduced ‘no conversion law,’ which had extremely strengthened the existing nationalism that turned towards our ministry. Due to baptismal and matrimonial service I conducted between a Buddhist young man and a Christian girl, i had to flee the country for security, thus becoming a refugee myself. Leaving our children behind, we came to Australia in December 2014.

Life in Australia
No permit to do any paid job, no Centrelink support, no medicare and life was so tough without the support and care from the church, Red Cross and community we received for about two years. Mulgrave Uniting Church became our mother church. We had a place to stay. But in those times I volunteered myself for the service of other refugees and asylum seekers. When we had permission to work, we took any available job, from gardening, picking, packing, cleaning, interpreting and translation.

Later, by God’s guidance, I could connect with Uniting Church to serve God. I used to answer, “I feel more than at Home” to the question, “Do you feel at home” in Australia, because I have never experienced such freedom, love and care.

I did supplied ministry at Noble Park UC for three months. And I have completed my first year of full time placement in Ulverstone- Sprent Parish. I have learned so much, and I have many more things to learn to serve Him effectively in this contemporary societies. God is good all the times.