It’s 7pm on a Saturday night in the historic village of Evandale, Tasmania.  With the windows blacked out, a big screen lowered from the ceiling and a HD projector and sound system in place, a little wooden hall has undergone its monthly transformation into the venue for a community film night with a difference. 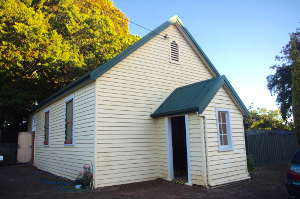 name Marginata. With the support of the Uniting Church – which owns the hall and holds a Big Studio Movie Licence – Red Chair Movies aims to bring together the community through screening high quality feature films and documentaries.

Films are chosen by a small group of friends who search out movies that are ‘beautiful, thought-provoking and uplifting’. Cultural diversity is also a priority and since it began in 2015 Red Chair Movies has shown films from more than 20 countries. There’s no admission charge, but gold coin donations from the 20 or so attendees cover hall hire and licence fees, and supper happens on a bring-a-plate basis.

Whilst some of the films shown have spiritual themes (e.g. The Way, Of Gods and Men), Marginata is careful not to impose our beliefs through Red Chair Movies. Instead we seek primarily to be a blessing to the community (Jer 29:7), build relationships and provoke thoughtful discussion. That said, several people have become involved with Marginata through Red Chair Movies, including retiree Bob who rarely misses either gathering.

If you’re still reading at this point, there’s probably two more things you’d like to know about Red Chair Movies: Firstly, ‘What’s with the ‘red chair?’ and secondly, ‘What films have you shown?’

The original ‘red chair’ belonged to an audiophile friend of a Marginata member. It was a leather lounge chair that was perfectly positioned between his stereo speakers. A ‘red chair’ song was one that deserved to be listened to with undivided attention from the comfort of the chair. We’ve applied the same notion to films and yes, there really is a red chair (with a lucky draw at each session to decide who gets to sit in it!).

As for the films shown at Red Chair Movies, here’s a list of some of our favourites: The Intouchables, Still Life, A Separation, Searching for Sugarman, Nebraska, Departures, The Lunchbox, Monsieur Lazhar, The Dark Horse, Sherpa, Still Alice, The Hunt for the Wilderpeople, Welcome, A Perfect Day, Lion, Rosalie Blum, The Band’s Visit, Welcome, A United Kingdom and Manchester by the Sea.

So, where to from here? The short answer is we’re not sure. Whilst Red Chair Movies is currently playing an important role in the life of our village, it may not always do so. But as long as the community wants it to go on we’ll happily keep gathering to laugh and cry and ponder our way through some of the world’s best films.