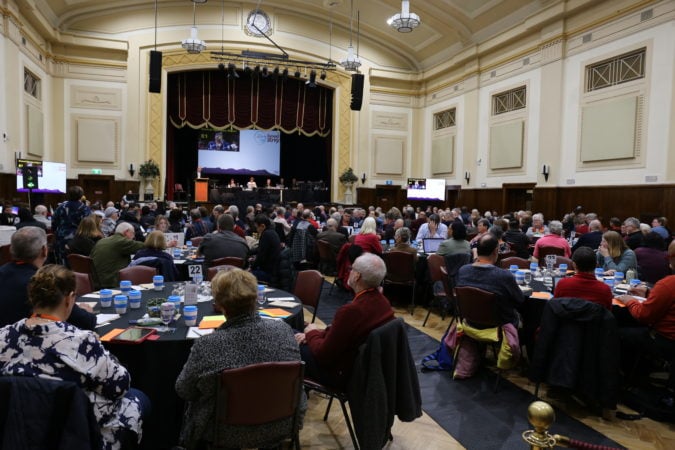 This year’s Synod meeting was held at Box Hill Town Hall, Melbourne from 6-9 July. The Synod met to hear reports, proposals and other matters that concern the general oversight, direction and administration of the Church’s life.

The theme for this meeting of the Synod of Victoria and Tasmania was Isaiah 43:19, “I am about to do a new thing; now it springs forth, do you not perceive it? I will make a way in the wilderness and rivers in the desert” (NRSV). This theme was used from the opening worship to the closing service.

Not only was the theme spoken about there were examples of things being done in a new way. During the communion part of the opening worship there were a variety of people involved – some Lay and some Ordained, some children and some adults as well as male and female. The newly installed Moderator Rev Denise Liersch chose the theme and spoke about the importance of the church from years ago and some of the ways in which church is conducted now.

One of the proposals being presented on the first day of the meeting was for the acceptance of a new Disability Action Plan. One of the speakers to this proposal was Meredith Allen. Meredith is the president of the International Society of Alternative and Augmentative Communication (ISAAC, www.isaac-online.org). I noted that when this proposal was being presented that the people involved came down the steps from the stage and so that all the presenters including Meredith Allen were on the same level. Meredith arranged and presented her speech via a recorded voice on her computer. It was good to see a person with a disability included in the presentation of this proposal. This proposal was then accepted by the members of the Synod meeting.

One of the surprises for me was that the Bible Study was presented by Dr Liz Boase. I have heard lectures from Liz before as she is one of the lecturers from the Adelaide College of Divinity. Over the four days of meetings she spoke about different ways that the church could go in the future: backwards, upwards, forwards and outwards. One of the comments made by Liz was to consider the church community as a community ‘on the outer’ – not liked by other members of the general community – and asked each of us to consider: what this might feel like? And what we can do about it? This is a new and different way of considering the church’s role in the wider community.

Morning and afternoon teas were provided to all members of this Synod – sometimes they included just some packets of biscuits. Image my surprise and pleasure at the morning teas that were hosted by PMWU cookbook, Uniting AgeWell and Russell Kennedy Lawyers. These morning teas included a number of slices and pastries which were very welcome after the long sessions of the Synod meeting.

The major proposal presented for consideration at this Synod meeting was the Uniting Church response to Voluntary Assisted Dying legislation which had recently come into law in Victoria. This is an important matter as the Synod sets the policy context for Uniting AgeWell, Uniting agencies and the Epworth Hospital group. The first draft of the proposed response was presented on the Saturday. The first discussions on this proposal were done in our working groups – these were allocated to us and separate from our table groups. After each meeting of the working groups the facilitation group considered the suggestions made and reworked the proposal and reported back to all the members of the Synod meeting. It was Monday before this proposal was discussed by the meeting as a whole. Eventually after much discussion and rewording the proposal was accepted by the meeting.

There were many reports presented to the Synod meeting. This is because all committees, agencies and presbyteries of the Uniting Church across Victoria and Tasmania have to report when the whole Synod meets together every eighteen months. For me some of the most inspirational reports came from the UAICC Tasmania and UAICC Victoria. The Tasmanian report was presented by Alison Overeem. Alison presented a couple of videos – one was about the Leprena community and a second one showing how Domestic Violence is being worked through by the Leprena Community. One of the proposals that was accepted by the Synod meeting was the acceptance of ‘The Statement from the Heart’ that has initially written at Uluru in 2017. Alison also spoke about what NAIDOC Week meant to her.

One of the other proposals discussed and accepted by this Synod meeting was for an increased support and participation from the under 50 age group of our wider church community. Part of this proposal was to work towards 30% of the next Synod meeting being under 50 years of age – a challenge and a new way of doing things for the church into the future.
by Shirley Bowers